Annapolis, MD – The Rural Maryland Council (RMC) and its membership convened at the DoubleTree Hilton Hotel in Annapolis on December 1, 2021, at 6:30 p.m. for its Executive Board Meeting and Rural Impacts Award Ceremony. This annual event provides an overview of upcoming events and activities for 2022 and honors advocates for rural Maryland communities. “Helping the Rural County economies recover quickly from the shocks they have suffered from the COVID Pandemic is the top priority at the Rural Maryland Council. This year’s awards combined with our Rural Summit in December give us hope and optimism that a rapid recovery is within our grasp” says John Hartline, RMC Board Chair.

This year, five awards were presented for the 2021 Rural Impact Award Ceremony: 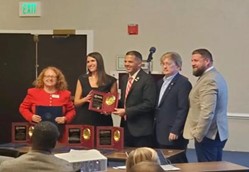 The Rural Community Development Award to the Town of Rising Sun in recognition for their dedication and creativity to improve the quality of life for their community. The Town has experienced a remarkable rebirth over the past three years. In 2018, roughly 50% of the downtown businesses were vacant and the Town center shopping center was struggling to fill tenant spaces as well. Over these three years, the Town was able to attract two regional banks, an upscale Coffee Shop, a Brew Pub, a Women’s Boutique, and a $2 million dollar upgrade and expansion of the area’s only car wash. The award was received by Cecil County Executive Danielle Hornberger, Rising Sun Mayor Travis Marion, Town administrator Calvin Bonenberger, and Commissioner Joseph Shephard.

The Rural Volunteer Award to Elizabeth Anne Glotfelty and the Honorable Craig Mathies, Sr. for their leadership, dedication, and noteworthy volunteer achievement beyond the call of one’s professional duties to help improve their community. Elizabeth Anne Glotfelty passed away in September 2022 leaving behind a legacy of charitable works that will benefit the community for decades. Anne was instrumental in the founding of the Mountain Loggers Group Association in 1995. Anne served the organization as treasurer since inception, but also and more significantly in many formal and informal capacities. She gave more of herself than her administrative skills. She was the indispensable force in organizing and conducting the Annual Elimination Dinner; the annual Christmas and Easter solicitation, collection, and delivery of toys to WVU Children’s Hospital; organizing the annual Christmas dinner, and always having a leading role in the annual Log-a-Load for Kids auction – donations to the Children’s Hospital are nearing $2 million to date. Dan Rider accepted the award on the family’s behalf.

The Honorable Craig Mathies, Sr. has been a Somerset County resident for over 51 years. Educated in the Somerset County Public School System, he graduated from Crisfield High School and attended the University of Maryland Eastern Shore. He is active in many community and civic organizations and is presently the Pastor of Zion Baptist Church in Cambridge. Craig is also President of the Somerset County Commissioners, representing the District. Matthew Teffeau accepted the award on the awardee’s behalf.

Rural Economic Development Award to the Frederick Innovative Technology Center, Inc. (FITCI) for leadership, dedication, and noteworthy achievement to help improve economic development opportunities in rural communities. Over the last 15 years, FITCI has served 163 companies that have created over 800 jobs. Many of their companies that have graduated stay in Frederick County and continue to flourish in the local economy. Additionally, they continue to give back to the FITCI community in many ways, including joining the advisory board. FITCI is Frederick’s first business incubator and only incubator/Accelerator combination with locations in the city and county. FITCI primarily supported local companies in the IT, Biotech, and Renewable Energy industries; today our scope includes cryptocurrency, cybersecurity, and distilling to name a few. The award was received by FITCI’s CEO Kathie Callahan Brady. 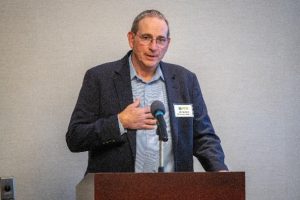 The Rural Champion Awards were received by Senator George Edwards and Senator Guy Guzzone for their outstanding leadership and public service in advocating for policy solutions to greatly benefit rural communities. Senator Edwards has a long record of public service. He was elected to the Senate in 2006 where he currently serves on the Senate Budget and Taxation Committee. Senator Edwards previously served in the House of Delegates from 1983 to 2007 as well as Commissioner with the Board of County Commissioners, Garrett County, 1974 to1978. He has strongly supported efforts to improve the quality of life in Western Maryland and all of the state’s rural communities. He served on the Task Force for Rural Internet, Broadband, Wireless, and Cellular Service and currently serves (and sponsored) on the Task Force for the Economic Future of Western Maryland as well as fought to establish and increase funding for the State’s Lakes Restoration and Improvement Fund. Additionally, he sponsored the creation of the Off-Highway Recreational Vehicle Trail Fund to be used to maintain and construct trails for off-highway recreational vehicles. The award was received by Senator Edwards.

Senator Guzzone was first elected to the Maryland House of Delegates in 2006 and served between 2007 and 2015. In 2014, he was elected to the Maryland Senate 2014 where he currently serves as Chair of the Senate Budget and Taxation Committee. During the 2021 Legislative Session, Senator Guzzone stood with the Rural Maryland Council in its request for supplemental budget funds. He also submitted a letter of support to the Governor of inclusion of funds in the Operating Budget. He had been a supporter of employee-owned businesses sponsoring legislation allowing a subtraction modification under the State income tax for income from a qualified transfer of stock or membership interest of a Maryland corporation or limited liability company to certain employee ownership entities. The senator’s District Manager Rick Benner accepted the award on his behalf.

The Rural Maryland Council operates under the direction of a 40-member executive board in a nonpartisan and nondiscriminatory manner. It serves as the state’s federally designated rural development council and functions as a voice for rural Maryland, advocating for and helping rural communities and businesses across the state to flourish and to gain equity to its suburban and urban counterparts. The vision for RMC is the ultimate realization that residents in rural communities are achieving success in education and employment, have access to affordable, quality health care and other vital public services, and live in an environment where natural and cultural resources are being sustained for future generations.