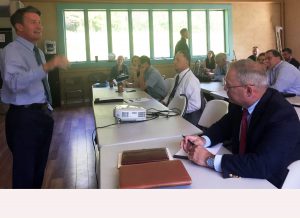 Harford County Executive Barry Glassman leads a discussion during a meeting of the Task Force on Rural Internet, Broadband, Wireless, and Cellular Service.

ANNAPOLIS, MD – Technology seems to be moving at the speed of light – unless, of course, you happen to live in one of Maryland’s rural communities where affordable, reliable high speed internet is spotty at best.

For Senator Adelaide C. Eckardt, District 37, one of 32 task force members and a long-standing advocate for rural broadband access, the final report is a culmination of many years of work. “I’ve been working in the legislature for 25 years, and for a number of those years I’ve worked on getting broadband access for our citizens. Over the years I’ve written many bills on this topic. It’s truly important to me that all of our citizens have adequate and affordable access, not just for work or school, but also for health reasons,” says Senator Eckardt.

“We have been trying to get cooperation between providers so that we are able to use and make the best use of the fiber that’s already available to reduce redundancy and improve efficiency, so that service can be provided at a reasonable cost. Cooperation between the electric cooperatives and providers is a huge step and accomplishment, and will be a model for other initiatives moving forward,” she adds. Senator Eckardt along with Maryland State Del. Johnny Mautz, District 37B, and Maryland State Del. Carol L. Krimm, District 3A, have requested the legislative authority for the rural electric cooperatives be drafted. The bill will be introduced during the 2019 Legislative Session.

Delegate Mautz understands the complexities of providing affordable broadband in rural communities, but believes that the implications of being left behind are far greater. “The task force looked at New York state’s ‘Broadband for All’ initiative and other programs around the country. When it came down to it, recommending a legal foundation for creating access to existing infrastructure for rural electrical cooperatives just made more sense,” he says. “Everyone needs broadband access to live, work and play in our rural communities whether it’s the poultry farmer using technology to manage data, the student doing homework, or the business owner trying to compete in a global economy. We can’t afford to allow our rural communities to be left behind,” Mautz adds.

“The broadband task force, comprised of private sector, government and legislative members, has been working together during the past two years investigating opportunities to make broadband accessible and affordable in the rural areas. Broadband is a ‘game changer’ for people in our rural areas to expand educational and economic development opportunities,” says Delegate Krimm.

The final report from the Task Force on Rural Internet, Broadband, Wireless, and Cellular Service spells out six recommendations. The first of which takes a page from the playbook of rural communities in Tennessee, Arkansas, Missouri and Indiana: implement laws that allow electric utility easements and rights-of-way to be used for broadband. Although many Americans look at broadband as simply another utility, for the service providers it’s about doing business and their bottom line, and providing broadband service in rural communities is a losing proposition. Under this key recommendation, rural electric cooperatives could consider the option of running fiber optic cable or leasing their unused fiber to other providers. Additional report recommendations are:

For task force chair Charlotte Davis, the enormity and importance of the report and work ahead can’t be understated. “Technology and the need for reliable and affordable broadband access is crucial to a better quality of life whether you live in a urban, suburban or rural area,” says Davis. “The task force had to gather a huge volume of material and engage a variety of stakeholders with widely varying motives. The task force members and everyone that helped us think through this gargantuan, but important issue, should be commended,” she adds. To view the full report, visit https://bit.ly/2Gyjd98.