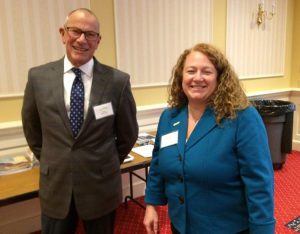 ANNAPOLIS, Md. — The Presidents Conference Center in the Miller Senate Building was packed for the Jan. 25 luncheon of the Rural Maryland Council’s board of directors, legislators, and associated guests.

The Rural Maryland Council, an independent state agency, brings together rural leaders, government officials, non-profits and for-profit organizations to develop public policy solutions to “improve the quality of life while preserving the cultural heritage of Maryland’s rural communities,” according to the RMC mission statement.

Guest speaker, U.S. Sen. Chris Van Hollen spoke passionately to the attendees about the government shutdown, which was still in place at that hour, and about the recently passed 2018 Farm Bill.

Van Hollen commended Maryland’s legislators and governor for their bipartisanship. “Thank you for being a model for how to get things done and work with the governor.”

The senator also reviewed some of the highlights of the Farm Bill. He pointed out that the previous Farm Bill contained conservation requirements and a budget for the Chesapeake Bay Watershed. However, the 2018 bill targets funds that will be based on the careful definitions and criteria spelled out in the bill, go directly to the Chesapeake Bay Watershed. Those earmarked funds in the 2018 Farm Bill are safe from being diverted to projects across the country. Additional highlights pointed out by Van Hollen were the funding of expanded crop insurance and improved support for dairy farmers. Funding for rural high-speed broadband also significantly increased.

As a ranking member of the Senate Finance Committee, Van Hollen assured the audience of about 125 people he is fighting to ensure federal funds to address the opioid overdose epidemic and the critical needs of rural infrastructure, including funding for Phase 2 of Interstate-81 on Maryland’s Eastern Shore.

• Infrastructure improvements, including the expansion of heavy rail for commerce, transit, and tourism-related purposes.

• Enabling and expanding telehealth to provide healthcare to rural areas.

The meeting concluded with an invitation to attend the spring RMC Quarterly & Executive Board Meeting in April.