BERLIN – A new campaign aims to raise awareness regarding the increased risk of suicide facing farmers.

Farmers are three times more likely to die by suicide than those outside the agriculture industry, according to the Centers for Disease Control (CDC). To address that fact, local organizations have launched the “Save a Shore Farmer” outreach campaign. 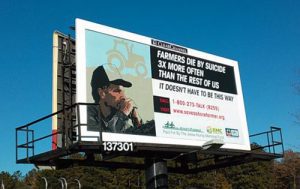 A billboard on Route 13 in Wicomico County was designed to bring attention to increasing farmer suicide rates.

“The CDC report highlighted three occupations that suffer high rates of suicide: farmers, forestry workers, and watermen,” said Kim Klump, president of the Klump Fund. “Because agriculture is a keystone of our local economy, and because so many local businesses are dependent on farming, we and our partners put together a program of advertising, education and resource availability aimed directly at those who work the soil, and those who depend on them.”

As 2018 proved to be a particularly difficult year for local farmers, who faced the impacts of too much rain, falling prices and trade wars, those with the Jesse Klump Suicide Awareness and Prevention Program are especially eager to share available resources with those who may be in need of help.

“We are under no delusion that we can get farmers to willingly attend the public suicide prevention classes that we conduct,” said Ron Pilling, secretary/treasurer of the Klump Fund. “Not only does their work, which is very solitary, put them at risk, but older men with easy access to the means of suicide are also very susceptible, and are in the group most independent and stigmatized about mental illnesses like depression. So instead we’re mounting a media outreach campaign that we hope will raise awareness and open minds to mental health care.”

In the fall, the Jesse Klump Suicide Awareness and Prevention Program partnered with the Suicide Prevention Coalition to launch “Save a Shore Farmer” with the help of a $19,000 grant from the Maryland Agricultural Education and Rural Development Assistance Fund.

Jackie Ward, a health planner at the Worcester County Health Department, is co-chair of the Suicide Prevention Coalition, which works to coordinate prevention and awareness efforts between partners in the tri-county area. She said the health department shared Klump’s and Pilling’s concerns and identified several factors that played into the increased suicide risk among farmers.

“Farming and agricultural occupations are physically demanding, prone to financial and production fluctuations, and dependent upon many things that are out of their control,” Ward said, pointing to weather and market prices as examples. “These occupational factors correlate with some suicide risk factors, many of which are compounded by rural environments, such as isolation, barriers to accessing mental health treatment, loss (relational, social, work, or financial), physical illness, easy access to lethal methods, and unwillingness to seek help because of the stigma attached to mental health and substance abuse disorders or to suicidal thoughts.”

Through the new Save a Shore Farmer campaign, a website (saveashorefarmer.org) has been created that outlines the causes of farm-related suicide, lists steps one can take to prevent a suicide and includes links to local resources. Pilling said volunteers would distribute printed information to businesses frequented by local farmers, screen public service announcements and work with groups like Future Farmers of America.

“If anyone knows of a place where we might hang posters and/or make brochures available, I encourage them to contact us at info@saveashorefarmer.org or by calling 443-982-2716,” Pilling said.

The campaign also includes billboards featuring the tagline “It doesn’t have to be this way.” Pilling said that within days of the signs going up in November, visits to the Save a Shore Farmer website spiked.

“We must find ways to keep farmers safe from suicide or else our economy, our ability to put wholesome food on our tables, and the overall public health of our communities will be crippled,” she said.